Cool interactive map by the Financial Times today, showing how overpopulation in some megacities is reaching critical levels. Central Paris‘ population today has 2 million, having lost 1 million since the 1920s, however its metropolitan area comprises around 11 million, many of these inhabitants outside the central core have not even been born in France. This imbalance -which is also economic- between the center and the periphery, is a time bomb.

Lagos, in Nigeria (photo), is a city suffering overpopulation. Mexico DF is home to more than 24 million souls. LA‘s almost 16 million are mostly dependent on cars for mobility. The world’s largest conurbation is still greater Tokyo (photo), a city that sits on one of the most active seismic faults on the planet is also very vulnerable to tsunamis. Cities continue to evolve and some of them continue to grow out of control, making them very difficult to manage and causing an almost unbearable strain. 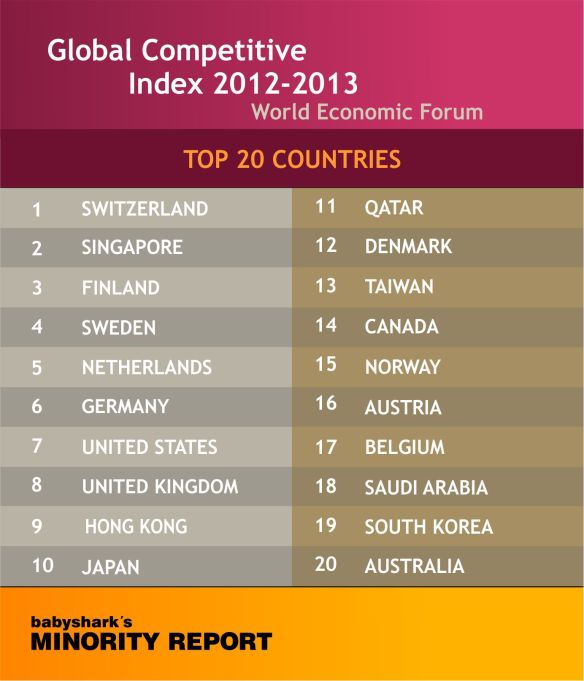 Switzerland ranks number one in global competitiveness this year, according to the World Economic Forum’s Global Competitive Index. Singapore, Finland and Sweden are also at the top. The US continues dropping in the ranking for fourth year in a row. In Europe, Spain lags behind at 36 and Greece at 96.

A curious Japanese festival involving a princess, a demon and a big iron penis

The Kanamara Matsuri (Iron Penis Festival) is held at the beginning of April on a Sunday at Wakamiya Hachimangu Shrine in Kawasaki Japan in the honor of the Kanamara Sama (Lord Iron Penis). The festival dates back to the 17th century when this area was a regular stop for travelers along the Tokaido, the most important of the Five Routes of the Edo period connecting Edo (modern-day Tokyo) to Kyoto. The festival was started by Meshimori Onna (as prostitutes were commonly called), who would attend the festival to pray for protection against gonorrea and other sexually-transmited diseases.

The legend, however, talks of a demon who lived in a princess’ vagina and would bite off the penises of those men who courted her. To avoid more of these incidents an iron phallus was built, which broke the demon’s teeth when it tried to bite yet another penis, and from that moment the festival celebrates this victory over the demon. 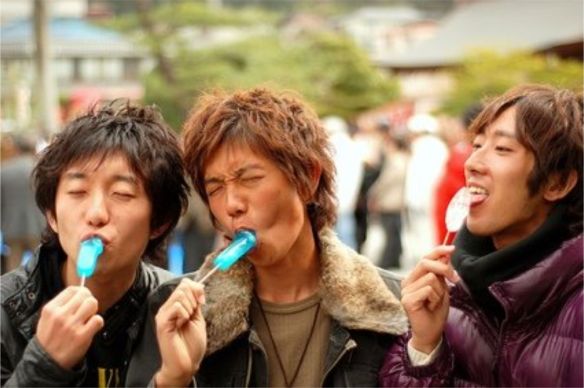 People of all ages participate in a parade, as can be seen in the images, and everybody wears or carries a huge penis, penis-shaped mikoshis (Shinto shrines), enjoy penis shaped candies and hot dogs, carve daikon (Japanese radishes) into penis shapes, and dress up as their favorite cartoon character with enlarged penises. Hugging the giant wooden “organs” is said to bring you good luck. The ceremony is headed by a priest that celebrates a full Shinto ritual.

Currently, the festival raises funds for AIDS charities and attracts a curious mix of populations, especially foreigners and Tokyo transvestites, which probably make up half the audience. Childless couples come to pray for fertility.

(To read my original article in PDF: All Hail the Power of the Big Bad Penis)

Pop music everywhere has become dull due to the use and abuse of song formulas and formats that are tired and are exasperatingly repetitive. A popular song in Germany can sound very similar to one in Finland or in the US. Still, innovation is possible with a little imagination. Japanese impresario Yasushi Akimoto has created an incredibly successful franchise slightly tweaking the typical model of the girl pop band. A Japanese television writer, lyricist, record producer, professor and vicepresident at Kyoto University of Art and Design, Akimoto launched the AKB48 concept in the year 2005. 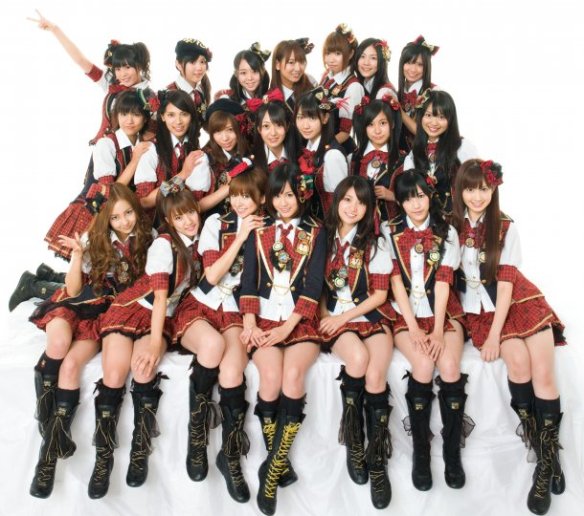 This is not your regular pop band, although musically it still sounds like just pop. What is interesting is what’s behind. The AKB stands for Akihabara, a distric in Tokyo, famous for being a major shopping area for electronics, computers and anime and is always teeming with otaku -a Japanese word for “geek”. 48 is the number of girls that make up the group. The first original idea behind the group is that they are idols that you can go and see anytime, because they have their own performance venue in Akihabara. The 48 girls are divided into groups that can take turns performing, so there is always a daily show. The theater is located on the 8th floor of a Don Quijote store (a popular department store chain in Japan) and due to the enormous demand now tickets are distributed via a lottery.

The second innovative idea was introduced in 2009: girls aggresively compete against each other and face elections by fans, who decide the member line-up that will record the next single. Only the top 21 members appear actively in the media. Additionally, there are many aspiring members, kenkyusei, which means “trainees”. In 2010 a new and original selection method was introduced to pick which girls participated in a recording: girls competed against each other in a rock-paper-scissors tournament. 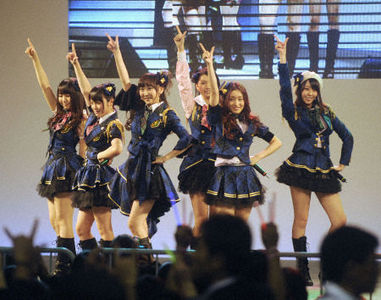 Akimoto has been criticized for sexualizing teen girls, because songs say things like “I want to take off my school uniform, I want to misbehave, you can do whatever you like, I want to experience adult pleasure”, but he replies that he simply reflects realities that young Japanese girls experience in their lives; their doubts, their problems, their aspirations and dreams. The lyrics also sometimes address serious issues like teen suicide, he says.

What is clear is that the concept, a unique combination of theatre company, girl band and reality show, is a huge success, with the girls becoming pop superstars and tickets to the theater permanently sold out and some singles selling more than a million copies in a single day. In the first six months of 2011, total sales of merchandise reached almost 70 million euros (aprox $93M). They will also have their own anime series and will have their own official shop where fans can purchase official merchandise and their own AKB48 cafe that will serve Japanese fusion food and desserts. They already have their own fight card videogame –AKB48 Stage Fighter.

Akimoto has already announced that versions of the band will be launched in Taiwan, Indonesia and in Singapore. He has also teamed up with Sony Music Japan to produce a new “official rival” that will be called Nogizaka46.

Below, a photo of AKB48’s new sister group: SDN48. This group is made up of older girls, 23 on average) and there are only 12 members. They will sing both in Korea and in Japanese.